When Sticks and Stones Break Your Bones, Ultrasound Will Heal You 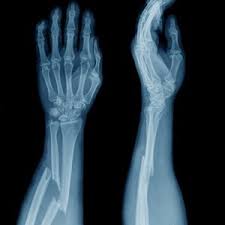 Healing broken bones with an ultrasound device for faster, pain-free and cost-effective healing.

According to the National Osteoporosis Foundation, cancer patients are more susceptible to bone fractures, due to both the direct effects of cancer on the skeleton, and to the side effects that come with many cancer specific therapies. This can be an extremely serious development for anyone with an immune system weakened from chemotherapy.  For many people who suffer from cancer or other chronic illnesses, delayed bone fracture healing is an extremely unpleasant “new normal” that can lead to pain, unnecessary surgery, infection, amputation, and even death.

Just like the kind used in pregnancy exams, ultrasound can accelerate bone fracture healing, with an impressive (90%+) rate of success. In fact, ultrasound is by far the most convenient and effective technology for healing fractures, particularly stubborn fractures that take longer to heal or don’t heal at all. And while ultrasound devices for healing bones have been around for over 40 years now (the very first device was approved in 1994), the technology has not advanced into a cost-effective, first-line treatment. The current FDA approved device on the market in the United States uses old techniques and retails at thousands of dollars per unit, which is frequently not reimbursed by insurance. This is a huge problem for the seven million people in the US who break bones each year, and it is worse for those who are disproportionately affected by delayed healing due to a compromised vascular system.

An up-to-date ultrasound device for bone fracture healing is long overdue. Sonogen Medical has addressed this challenge by creating a low-intensity pulsed ultrasound fracture healing device that promises far better outcomes for fracture patients than any existing device on the market today, at a significantly lower price price point. The Sonogen device will get patients back on their feet faster, and will dramatically reduce the costs, risks, and pain of undesirable outcomes.

Songen has teamed up with ultrasound medical experts from Thomas Jefferson University Hospital and the Mayo Clinic. In an initial proof of concept study, our team demonstrated that the Sonogen device improved bone stiffness (density) and strength by 25% over the current FDA approved device. With these impressive results, the FDA has given us the green light to move forward with certifying our device for sale in the United States. To do this, we must develop a commercial prototype of our device. This will ultimately allow us to apply for FDA regulatory approval, so we can get this device in the hands of the patients who need it most.

Funds raised from this campaign will be used to build an initial commercial prototype of our device, so that we can complete the necessary third-party safety testing, and submit all required FDA paperwork towards regulatory approval.  This includes:$125,000 for device fabrication, resulting in three prototypes of a commercial prototype device with core functionality. If we exceed our goa, excess funds will be dedicated to devise safety testing and the hiring of FDA consultants. See breakdown below:

What key resources have/will you acquire to facilitate the accomplishment of the above R&D milestone?

Sonogen has an excellent relationship with Thomas Jefferson University Hospital, which provided funds in support of initial proof of concept testing, as well as with the Advanced Biomechanics Laboratory at the Mayo Clinic.

Sonogen is working towards a Series A venture capital raise, to begin full device production once FDA approval is finalized.

If your technology were to disappear in the “Valley of Death” funding gap, how might this impact society?

If you are one of the seven million Americans who happen to break a bone this year, your likelihood of being healed through ultrasound, a noninvasive, painless, and highly effective treatment, is very small. This is a bigger set back for those with poor bone health due to age, osteoporosis, poor blood circulation and even cancer. If Sonogen’s ultrasound device does not advance to help those in need, the current status quo for bone healing will remain. We cannot accept this.

Jason is a successful entrepreneur with just under 30 years of experience in technical project management, and a track record of entrepreneurial success. Jason is a patent-holding cybersecurity subject matter expert, with a special focus on identity and access management, data warehousing, and cloud technologies. Jason is also a National Intelligence Officer, having supported classified national intelligence initiatives for the last decade. Notably, he was the Founder and Chief Technical Officer of Aerstone, one of just five cybersecurity companies in the world certified by the NSA for technical vulnerability assessment.

Throughout his career, Jason has delighted in tackling hard technical problems, at scale, for some of the world’s largest organizations. He has spoken extensively and internationally on a broad range of topics, including privacy, cryptography, systems migration, and big data management. He has served as a managing consultant on mission critical programs for the Federal Government, U.S. Military, numerous Fortune 100 companies, the U.S. Intelligence Community, and NATO. Jason has a thorough grasp of business financial management best practices, and specifically excels at identifying and managing to technical objectives.

Jason holds an undergraduate degree in Economics from Drew University, and dual Master’s degrees in Business Administration and International Business from the Katz Graduate School of Business at the University of Pittsburgh.

Robert is a biophysicist with more than 30 years of experience. He has been studying the interaction between external energy fields and human tissue since his time at Johns Hopkins, where he earned a bachelor’s degree in bioengineering. He holds a master’s degree in applied physics from Princeton University and a doctorate in biophysics from Syracuse University. He was a National Research Council Resident Research Associate at the National Institutes of Health Clinical Center.

Robert is a Senior member of IEEE, a Fellow of the American Institute of Ultrasound in Medicine, and past president of the Ultrasonic Industry Association. He is founding editor of the Journal of Therapeutic Ultrasound, and Associate Editor-in-Chief of the Transactions on Ultrasonics, Ferroelectrics and Frequency Control published by IEEE. He co-chaired the 11th International Symposium on Therapeutic Ultrasound, and served as the United States Delegate of the American National Standards Institute at the International Electrotechnical Commission meeting on ultrasound standards.
Robert is co-author on over three dozen scientific papers, and is co-inventor on several ultrasound patents. He serves as Director of STEAM at Portledge School, and holds adjunct professorships at Hofstra University School of Engineering and New York Institute of Technology. His current research focus is the integration of low intensity pulsed ultrasound therapy with imaging.

Alan is a seasoned biophysicist and electrical engineer with more than 50 years of experience. His extensive career has been dedicated to the study of acoustics, including both military anti sonar and medical ultrasound applications.

Alan has published papers in the U.S. Navy Journal of Underwater Acoustics, I.E.E.E. Transactions, and several NATO symposia. He is the co-author of “Introduction to Acoustical Space-Time Information Processing,” written under the auspices of the Office of Naval Research, addressing the application of advanced signal processing for signal detection in underwater acoustics in Navy problems. He was awarded Best Paper in United States in 1975 by the I.E.E.E. for his submission titled “Sonar Technology.” Since 1995, Mr. Winder has been awarded 11 patents, with two pending, almost all in the field of therapeutic ultrasound for bone fracture healing.