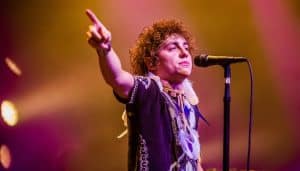 Many of us yearn for the days of Led Zeppelin and other hard rock and blues-rock bands. That’s why many rock fans were happy to see Greta Van Fleet came to the world stage. The group was formed in 2012 by twin brothers Jake and Josh Kiszka, their little brother Sam, and Kyle Hauck, the drummer, who has subsequently been replaced by Danny Wagner.

Greta Van Fleet truly came to prominence in 2017 when they released their first studio EP called Black Smoke Rising. The main song from the EP called “Highway Tune” was immediately praised for how similar it is to some of the best Led Zeppelin songs and almost equally great. It was initially heard in the hit show Shameless in 2016. All who once loved Led Zeppelin flocked in groves to listen to this new wonder band after the mainstream publication. The single dominated the Billboard US Mainstream Rock and Active Rock charts throughout September in 2017.

Their initial rise to fame among hard rock fans has prompted them to continue their work. They have subsequently released another EP called From the Fires and a full studio album in 2018 named Anthem of the Peaceful Army. The album was in the top ten places of many charts across the globe, while the EP received the 2019 Grammy Award for Best Rock Album.

Even though some might state that their musical style is too similar to Led Zeppelin, fans don’t hate them for it. Even Robert Plant himself said that they are his favorite new band, calling them Led Zeppelin I.

The fame and praise might have hit this young group in the head, but they are keen on holding their ground and giving what they can to others. They decided to donate parts of each ticket from their December 2018 concert in Detroit to the CHM Foundation or the Children’s Foundation. The charity works to award grants that support the advancement of children’s health and wellness. Their Grammy nomination prompted the donation.

The band performed at the 26th Annual Elton John AIDS Foundation Academy Awards Viewing Party, a popular charity event in Hollywood that tends to raise as much as $8 million. Greta Van Fleet was the personal choice of Elton John.

Besides events, they also strive to bring more attention to charitable causes as well. In 2018 they supported the James Rhodes Don’t Stop the Music campaign and called others to the same. The campaign aims to improve music education and allow children to have more chances to play music like their favorite bands.

All in all, Greta Van Fleet is only starting their music career, but it’s lovely to see them strive to help others. They are still very young, and there’s a lot that they will do in the future. In whichever way their career progresses, it’s beautiful to witness the fact that they are already genuine agents of positive change, just like many other, older bands across the globe.