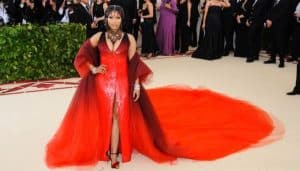 Who doesn’t know Nicki Minaj? There is hardly a person alive who isn’t at least familiar with this extremely famous American singer and rapper.

She started her long career back in 2004 when she was in her early 20s. Upon the release of her first mixtape called Playtime Is Over in 2007, she gained some recognition. More fame followed with her next two mixtapes that came out in 2008 and 2009. However, after she released her first album called Pink Friday in 2010, she truly came to power as the album reached the number one spot on the US Billboard 200. The album was also certified triple platinum.

After Pink Friday, a stream of success followed. She released other albums, singles, played in movies, and worked as a judge in the American Idol. If that weren’t enough, a great many awards and recognitions followed as well. She was the first female artist to be included on MTV’s Hottest MC List, and she was included in Time magazine’s list of 100 most influential people in the world. The unique pink-haired singer holds the most Billboard Hot 100 entries among women of all music genres. So, it’s no wonder she is often dubbed the Queen of Rap by fans and the media.

Being one of the world’s best-selling music artists of all time hasn’t stopped her from becoming a big agent of positive change. That’s because Nicki Minaj has used her wealth and massive influence to bring good to this world many times over, and she is likely to continue to do so for as long as she walks this earth.

We know her as a big supporter of several charities, like the Red Cross, Save the Music Foundation, and Get Schooled Foundation. Minaj has also supported a great many causes she cares deeply for, like human rights, education, children, disaster relief, and a lot more.

In 2012, after the terrible Hurricane Sandy hit the states, she donated $15,000 to the Food Bank for New York City so the homeless could have meals for Thanksgiving. At the same time, she decided to spread some holiday-season joy by going back to her Queens elementary school and handing out free turkeys to the locals. In 2017, after another hurricane, we remember as Harvey struck Texas, Nicki once again made donations to the Red Cross.

However, she really likes to help out her fans, which she had proven when she paid student loans and tuition fees to 30 of her fans and promised to do the same in the future. At one point, she also surprised everyone by revealing on her Instagram that she has been helping a village in India for several years. Nicki was donating money through her pastor, and as a result, she brought joy to the hearts of those villages. They got to build two water wells, a tailoring institute, a computer center, and start a reading program.

Naturally, these are just some of the many special things she has done over the years. We can safely say that Nicki has done her part in the world-wide fight for positive change, and we hope she continues to do the same for many years to come.