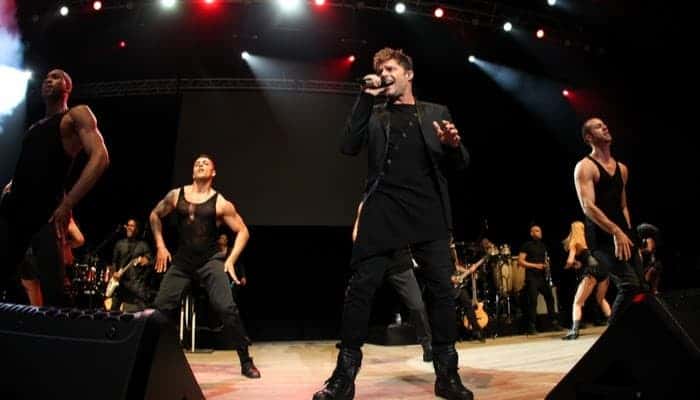 Enrique Martín Morales, better known as Ricky Martin, is a popular Puerto Rican singer, songwriter, and humanitarian, who is also known as the ‘King of Latin Pop’ and the ‘Latin Music King.’ Born in San Juan, Puerto Rico, on December 24, 1971, he entered the world of music at age 12, as one of the all-boy pop group members Menudo.

After five years, Ricky left the group and started his solo career. He released several solo albums in the Spanish language, but he gained worldwide fame after he released his megahit ‘Livin’ la Vida Loca.’ Since then, he’s been having a string of successful hits and albums and became one of the best-selling Latin music artists of all time, with over 70 million records sold worldwide. ‘Livin’ la Vida Loca’ is a certified platinum hit in the US and the UK and is one of the best-selling singles of all time. This song was also a catalyst for the Latin pop explosion that followed and helped other Spanish-speaking artists enter the English-speaking market.

Eager to make his first solo album, he signed to Sony Discos, but the deal was so bad that he would only get one cent of royalties for each sold album. Despite the unfair contract, Martin referred to his first record as the start of something phenomenal for him. The album was a major success, so Martin went on tour throughout Latin America.

With his third album A Medio Vivir and the breakthrough hit single ‘Maria,’ Martin finally grabbed the rest of the world’s attention, selling over 3 million copies of the album.

He also acted on Broadway in the play Les Misérables. But when he performed at the 1998 World Cup for over a billion viewers, his career skyrocketed. He performed at the 41st Annual Grammy Awards and soon after released his most successful self-titled album in English. After this success and a year-long Livin’ la Vida Loca tour, Martin released another album, Sound Loaded, another worldwide hit album, with such singles as ‘She Bangs’ and ‘Nobody Wants to Be Lonely.’

Since then, Ricky Martin has had a string of great albums and sold-out tours, but in 2007, he took a break from the music industry and focused on his private life. It was rumored that he was gay for years, but Martin always refused to comment on his sexuality. He risked it all and publicly came out in 2010, becoming the first mainstream Latin music star to come out. Martin said that ‘these years in silence and reflection made me stronger and reminded me that acceptance has to come from within and that this kind of truth gives me the power to conquer emotions I didn’t even know existed.’ After that, he came back to the spotlight with his book, new albums, his position as a coach in The Voice Australia, and his fantastic role as Antonio D’Amico in The Assassination of Gianni Versace: American Crime Story.

Aside from being known as a successful artist, Ricky Martin is globally known as an active philanthropist. Since his Menudo days, when he was serving as a UNICEF ambassador, to his main charitable focus, The Ricky Martin Foundation, which he founded to advocate for children around the world, Martin never stops caring for others. He strongly advocates for children’s well-being around the globe in critical areas such as social justice, education, and health. He was also one of the most influential people who helped rebuild Puerto Rico and Mexico after natural disasters such as Hurricane Maria and the Mexican earthquake.

He also supports such charities and foundations as Alzheimer’s Society, American Foundation for AIDS Research, Music for Relief, and Cancer Research Institute. It’s no wonder that so many of his fans see him as a hero and a true role model. For us, he is one of the most inspiring agents of positive change!