Embracing the Journey: From a Child’s Perspective 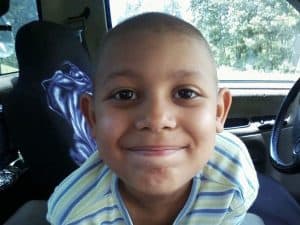 Acute lymphoblastic leukemia, ALL, is the most common pediatric cancer in America. As treatments and procedures have been honed for years, Paige’s positive experience with treatment provides hope and a reminder of the immense strength cancer patients can exhibit in difficult situations. Maybe it was innocence, or wisdom, that allowed Paige to accept her situation, but it was something that carried her through trying times.

“I had just actually started my kindergarten year in school so I was really young, around 6 years old. The whole reason we found out I had [cancer] is because I had fallen on a box in my grandma’s house and I got a bruise on my cheek and it stayed there for a really long time. Then I started getting sick a lot.”

Though Paige was repeatedly getting sick, the doctor said it was just the flu. However, Paige’s family knew to be cautious and proceeded to obtain blood work done.

“It was diagnosed in 2010 when I went to the doctor and I had blood work done. I actually went to go eat at Ihop [after] and we weren’t even there for 10 minutes [when] the place where I had my blood work, they were calling me telling me I needed to get rushed to the hospital as soon as possible. I had acute lymphoblastic leukemia.”

Paige shares that her family was depressed and scared for the first couple of months.

Initially, Paige was scared too, and in a lot of pain, until she met friends at the hospital, that made the journey a little more bearable. Alongside chemotherapy, bone marrow aspirations were performed, a procedure in which a sample of the liquid part of the soft tissue inside your bones is taken. These samples were then tested. Paige received a combination of chemotherapy drugs including vincristine, daunorubicin, dexamethasone, asparagine, and lastly intrathecal chemotherapy via lumbar puncture. She had a port for administering chemotherapy as well as a central line to give fluids, blood or medications or to do medical tests quickly. This is far greater than any child should have to go through, but Paige has a positive outlook on the experience and its effect.

9 years later, at 15 years old, Paige has a perseverant demeanor—a result of her experience with cancer.

“I used to be tough but now I feel way more tough. I feel like I can do anything now.”

Her message to others fighting cancer: stay strong and to not let cancer scare you—it was something that helped her. She shares, “It is nothing to be scared of.”

Paige remembers that the doctors used a fake doll to describe the procedures that were to be performed on her.

“You could poke the doll like [the doctors] would do to you, you could play doctor with the doll. So, it got me used to what they would do to me, it got me a little bit more comfortable.”

Paige decided to embrace the process and everything it came with. But she understands that it could bother others. Children in particular need to be supported when important changes such as hair loss, occur, as a result of cancer. They might be more vulnerable to negative thoughts and emotions since they don’t fully understand what’s happening to them and why. However, Paige was lucky to have a supportive family. Even though she was called a boy a few times, she wasn’t bothered when her hair started to fall out. In fact, Paige recalls the day she finally accepted her hair loss fondly.

“My aunt and my uncle used to smoke cigarettes and they were outside smoking one day and me and my other aunt [were] inside. We were pulling out my hair actually. And my aunt came back in and I had no hair left and they were like, ‘Oh my gosh, what happened?’ We were like, ‘We pulled out my hair!’”

As a child, this support was extremely helpful, which is why Paige encourages children, especially, to embrace the emotional and physical difficulties cancer brings as it fosters, among many things, growth. The journey will be hard either way—so, as much as you can, why not try to brace it with courage and acceptance?

If I could describe Astrid in one word, it would be: empowered. Astrid has found a way to entwine herself with empowerment for herself and others through her daily work,…Read More