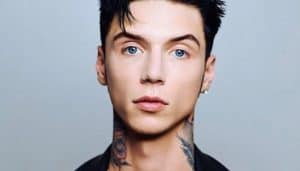 It paid off: Black Veil Brides reached the No.1 spot on Billboard’s alternative rock chart by selling 10,000 copies of their debut album, We Stitch These Wounds, in the first week alone. They’ve been on tour practically ever since, and they have amassed a passionate, young fanbase. The lyrical content had a lot to do with that, championing the underdog in a fight against bullies. Another compelling factor is the band’s creative costumes conceptualized by Biersack.

After achieving phenomenal success with Black Veil Brides, publishing three albums, and starring in the band’s full-length feature film Legions of the Black, he announced he would start his solo project under his stage name, Andy Black. He has published two synth pop-influenced solo albums so far.

Known for his passionate performance style, Andy has shattered three ribs and broken his nose on stage in two separate accidents in 2011. In an interview for Revolver, he described his frequent injuries as “the byproduct of the chaos of being on stage.” He has been candid about his struggles in life, particularly his battles with alcoholism, anxiety, and OCD, and these stories have featured heavily in the band’s lyrics.

Opening up for Kerrang, he stated that he turned his life around when his grandmother was diagnosed with cancer, and he went back to his home town to care for her while she was undergoing chemotherapy. This confession is something most people who have been affected by cancer can relate to, and it certainly helped Andy Black become an agent of positive change.

Nowadays, when he’s not on tour, Andy Black lives a quiet family life with his wife Juliet Simms and their cats and dogs. They notably did charity work together on two separate occasions. In 2015, they raised 15,000 dollars in one day when they launched a Prizeo charity page in support of the Alive Music Project and the It Gets Better Tour. Two years before that, they donated some of their clothes to raise money for Big Cat Rescue and Running Wild in the Night. Andy was also highlighted by PETA in 2018 when he won their Best Voice For Animals Award.

Black Veil Brides also participated in charity work when they teamed up for The Bully Project to create a special edition anti-bully T-shirt and donated all the profits to charity.

Open, passionate, and apologetic, Andy Black often spoke about his desire to overcome his issues and give everything he has to his art. Many of his young fans write daily about how he has been an agent of positivity and a beacon of guiding light in their lives. As a society, we need more celebrities like Andy Black, who would use their fame as a platform to do good.