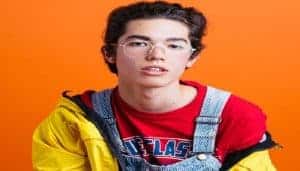 Nowadays, stars often rise to fame through social media, and such was the case with Conan Gray. This young YouTube star was born in 1998 to a Japanese mother and an Irish father. Living in California and Texas and frequently moving throughout a significant part of his formative years hugely influenced his later musical style and lyrics.

Today, this exceptional young man has millions of subscribers on his Youtube channel, having started creating videos when he was nine. This platform allowed him to launch his music career, where he’s already seen a lot of success for someone so young.

So far his achievements include the 2019 Shorty Award for Best Youtube Musician, as well as performing as an opening act for Panic! At the Disco. His 2019 European tour sold out. But the reason why Conan Gray is such a fascinating phenomenon in the age of social media is not only his musicianship, but his role as an agent of positive change in society for those who feel marginalized.

Conan often says that his reason to start making music was that it gave him a way to express his emotions. He’d been a quiet, introverted kid, uprooted by frequent moves so many times that friends were difficult to come by and prejudice was frequently met. Music for him was a way to cure his loneliness and reach out to others — and that’s how his EP Sunset Season came to be.

Another aspect of his personality that makes its way into his music is his Japanese-American heritage, which is often the topic of discussion online. Conan has stated in multiple interviews that being mixed made him feel like he didn’t belong anywhere, which is part of the reason why he tried to reach out to other people through his music.

Gray’s presence in the American music industry has been hard-won because of his heritage. “I was able to wiggle my way into the music industry by being slightly white-passing,” he said to Gal-Dem. And he certainly is something special amid the other Youtube stars who are turning to music. With deeply personal lyrics, great vocals, and sentimental compositions, Conan Gray is a voice of the marginalized community.

This outspoken young star has also made it more acceptable for boys his age to be “girly,” and he has frequently talked about such topics while creating art on his channel. An unapologetic lover of design and fashion, Gray has a specific aesthetic that is part of his artistic expression, which he integrates to send a strong message to everyone listening that they are not alone.

No matter whether his fans are also experiencing being marginalized like Conan, or they felt “weird” due to being unable to fulfill the expectations of modern society, or just experienced being alone, sick, and lonely — they found comfort in his music and guidance. That’s what it means to shine bright and bring about positive change in society. Impacting just one life is already a huge accomplishment, and there is no doubt that Conan Gray is someone capable of reaching many lives.