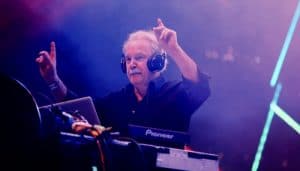 The vast majority of us wouldn’t be able to pick Giorgio Moroder out of a lineup. However, unless you’ve been living under a rock for the past 50 years, you’ve heard most of the hits he has written and produced for various artists. Giorgio Moroder pioneered disco music through numerous collaborations with Donna Summer and invented the entire soundscape of electronic dance music as a solo artist and producer. What’s more, when he turned his eye to film scoring, the world got to enjoy his songwriting talents through hits such as “Flashdance… What A Feeling” and “Take My Breath Away.” These two songs alone have earned him three Academy Awards and four Golden Globes.


After leaving an indelible mark on the face of popular music during the 80s, he was on hiatus throughout the 90s and 00s. What prompted his return was a call from one of many groups inspired by Moroder, Daft Punk. They asked him to contribute a monolog about his life and career for “Giorgio By Moroder,” the third track on their seminal album “Random Access Memories.” On the nine-minute stunner, Giorgio talks of what happens when you free your mind from preconceptions of what music should be. As it seemed, the collaboration gave him a second wind, captured in the brilliant title for one of his comeback tracks, “74 Is the New 24”.

One of the subjects Moroder was most eager to talk about after his return was the legacy of hits he created with his muse, Donna Summer. In a Spin interview in 2013, he talked about how they drifted apart in the 80s. Eventually, they reconnected when she started living in his apartment building a few years before her untimely passing due to lung cancer in 2012. In 2014, he revealed in an interview for The Guardian that he even had plans to go out on tour with the disco diva, but the advance of her illness prevented it.

Before his return to music, Moroder was spotted on the Charity Gala for the Cardiovascular Foundation hosted by Me Hermann at Hotel Dassault on November 9, 2011 in Paris, France. After creating his comeback album “Déjà Vu,” he once again proved his generosity by partnering with Bridges for Music on a fundraising event held at Shoreditch House on May 27, 2015. All proceeds of the event went towards charity to help with the construction of a music school in Langa, Cape Town.

Speaking of his vision to generate positive change through music, the “father of disco” said: “I believe dance music can be an amazing tool to break down social barriers and bring hope. Dance music doesn’t care of where you live, who your friends are, or how much money you make, neither if you are 74 or 24!”

Seeing how Moroder has influenced the world not only through his music but by his return as a vital electronic music artist and DJ in his late 70s, we are inclined to agree with his message of hope and change.