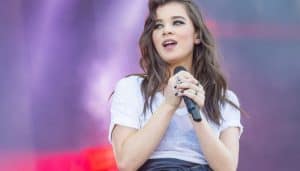 Hailee Steinfeld is a young singer and actress that is yet likely to show the apex of her incredible talent, both in the singing and acting department. However, she has had a few exciting roles already, having started acting at only ten years old. She released her first single in 2015, followed by her extended play debut called Haiz a few months later. Steinfeld’s 2017 single reached the Billboard Hot 100 chart.

Music and acting isn’t all this young lady are known for, as she has been making an effort to give back since the earliest beginnings of her career. At just 14 years old, Hailee joined the No Kid Hungry campaign, following in the footsteps of Jeff Bridges, who was her co-star in the film True Grit. By her admission, she had been shocked to learn that there are children her age who didn’t have access to food in the U.S. and decided to do everything she could to change it, especially by inspiring other people to follow her lead and take the No Kid Hungry Pledge.

Hailee Steinfeld also became a MISSION Brand Ambassador to help build a healthier future for the kids at Children’s Hospital Los Angeles in 2017. “I’ve been a longtime supporter of the amazing work and services Children’s Hospital of Los Angeles provides for families and children in need. I hope with this MISSION partnership, everyone can be inspired and motivated to extend their own hand in service of others.”

Hailee collaborated with them on the “What’s Your Mission?” campaign, by promoting a limited edition “What’s Your Mission?” graphic T-shirt, with $5 from every purchase benefiting Children’s Hospital Los Angeles. “We are incredibly grateful to Hailee Steinfeld, a steadfast and generous partner to Children’s Hospital Los Angeles, and to MISSION for creating this campaign to support the CHLA mission—creating hope and building healthier futures for children. CHLA appreciates collaborations that intersect celebrity, consumers, brands, and philanthropy that are a win for all,” they said at CHLA, highlighting the power that celebrities can have in raising awareness of a great philanthropic cause.

In our fast-paced way of living where not many young people are interested in the experiences of others, Hailee Steinfeld sets a great example of what it means to use your star power for a useful purpose. Even the smallest contribution to a charitable cause is valuable, but a role model is often needed to show the way, especially to a young and impressionable audience. It is why young stars like Steinfeld can contribute significantly to ensuring that the new generations know about the pressing issues in society and take part in solving them.