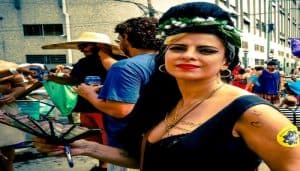 Amy Winehouse had left us too soon, but not before dazzling us with her incredible talent and heart of gold. Her star still shines bright and teaches us that it’s essential to make the time to help those who are less fortunate or struggling with a vicious disease.

The contralto queen of soul, jazz, and rhythm and blues, Amy Winehouse, was an acclaimed singer and songwriter from London. She tragically died of alcohol poisoning in 2011, at the age of 27. Winehouse was the first British female artist to win five Grammys, all of which she got for her second album Back to Black in 2008.

As an accomplished artist, Amy Winehouse thought it extremely important to use her star power for useful purposes. She was particularly passionate about raising awareness of breast cancer and campaigning for funds to help fight it. One of her more high-profile breast cancer charity efforts saw her appearing naked in Easy Living magazine alongside Sade and Helena Bonham Carter to raise awareness of this horrible disease.

Winehouse’s other notable charity activities include various other causes, although breast cancer remained her primary concern. In 2009 Amy Winehouse showed interest in helping young artists from her island sanctuary of St. Lucia express their art. She had also supported the Hear The World campaign, raising awareness of the troubles of hearing loss and promoting good hearing. Raising awareness of climate change was another cause close to Winehouse’s heart, as she participated in the making of a CD together with her Cuban colleagues. Winehouse also donated her song Back to Black to Born HIV Free campaign back in 2010, and the song was the soundtrack for Baby In The Sky.

However, Amy Winehouse was no stranger to more personal gestures and charity efforts. In St. Lucia, she paid for Julian Jean-Baptiste’s medical bills which allowed him to get surgery for his hernia. According to his story, Winehouse had walked up to him on a beach and asked about his health, which led to her giving him money to see a doctor and pay for his fees. She had also donated designer clothes estimated to be worth over £20,000 to a London charity shop.

Amy Winehouse was a force of good in life, and after her death, the Amy Winehouse Foundation still upholds the values that the singer held dear and continues to work in her name. Founded by Winehouse’s family, the foundation focuses on informing and educating young people who struggle with drug and alcohol abuse, as well as supporting those who are vulnerable or disadvantaged through circumstance, especially by substance abuse.

The Amy Winehouse Foundation relies on donations and fundraising events to support charitable causes. It realizes royalties from Lioness: Hidden Treasures album sales, as well as book sales of Amy — My Daughter, which is Winehouse’s biography written by her father.

Amy Winehouse was a real powerhouse of the music industry, and her charity efforts will mainly be remembered by all who hold her music dear to their hearts. The real power of music and its ability to facilitate positive change in society is apparent from Amy Winehouse’s shining example, as she was one of the rare people who give back to the community at every step.

Josh Andres (Statik Lnk) hasn’t been in the music business for long, but after trying out different things in life, he realized that music was definitely his calling. His fans…Read More