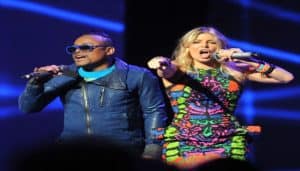 In today’s celebrity-obsessed world, it’s not strange for artists to hold a lot of power to make and start positive changes in society. And many of them strive to do this and make the world a better place both with the help of their music and their charity work.

The supergroup Black Eyed Peas is one of those agents of positive change, as its famous members have supported and founded various charities, as well as fought difficult battles with illness themselves.

The group was founded in 1995 in Los Angeles, first within the genre of alternative hip hop. Taboo, will.i.am, apl.de.ap, and Fergie only managed to hit it big in 2003 with their hit-album Elephunk, after they moved the group into dance-pop waters. Since then, they went on to sell over 76 million records with numerous hits gracing the top spots in the charts.

Their story sounds like a music business fairytale, but it wasn’t always easy — especially when group member Jaime Gomez, known as Taboo, was diagnosed with testicular cancer in 2014. His personal experience inspired a track called The Fight, which is Taboo’s anthem of survival. He donated all the proceeds to the American Cancer Society.

Taboo’s battle with cancer started after he experienced severe pain following one of the group’s performances. He was diagnosed with stage 2 cancer and had to undergo surgery, as well as 12 weeks of chemotherapy. Fortunately, the treatment went well, and he has been in remission since 2015 — an outcome that eventually led to him establishing more healthy habits and maintaining his well-being.

After releasing his charity track, Taboo stated: “To the millions of survivors and caregivers out there who are either facing this disease or adjusting to life after cancer, I want you to know: I’m in the trenches with you. And the American Cancer Society is too. I’m so proud to release The Fight because it’s truly an anthem of survivorship. I want to use this song and my story to inspire and motivate people all over the world to live their best, healthiest lives possible.”

Taboo’s story proves that cancer can be beaten, and he also shows a great example in his efforts to give back to the community that’s helped him and contribute to the global fight against cancer. Along with other members of Black Eyed Peas who have been affected by their colleague’s struggle, he’s done a great job of reminding the world that a lot can be accomplished if we all work together.

Artists understand that music can be used as a universal language to tear down barriers and make this world a better place. Those who dedicate themselves to using their celebrity status and platform to ensure that we as a society discuss the important things are indeed agents of positive change we should all stand behind.