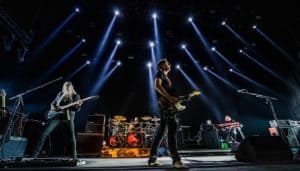 Snow Patrol is a famous rock band hailing from Northern Ireland and Scotland, depending on which band member you’re considering. The lead singer and rhythm guitarist Gary Lightbody, the drummer Jonny Quinn, the lead guitarist and backing vocalist Nathan Connolly, and bassist Paul Wilson, are all from Northern Ireland, while Johnny McDaid, who primarily plays the keyboard, is from Scotland.

The band formed way back in 1994 as an indie rock band, but they gained popularity much later in the early 2000s when they decided to ride the popular post-Britpop movement. Their first album from that period, Final Straw, rose to massive popularity in the UK and sold more than 3 million copies throughout the world. Their single Chasing Cars from the next album quickly became the most played song on the UK radio in the 21st century, which is certainly no small feat.

By the end of 2019, after 25 years in existence, Snow Patrol has released a total of seven studio albums and three compilation albums, as well as eight EPs and 35 singles.

From a small relatively unknown band, Snow Patrol became a band that sold more than 16 million records across the globe. However, all that success hasn’t gone to their heads, and the band is very down to earth. They keep on playing and touring worldwide, but they also keep finding time to support the causes and foundations they believe in whenever they can.

First of all, they are big supporters of local bands in Belfast and have contributed greatly to the rising optimism around the music scene in the area. Many local bands have achieved several of their goals thanks to the kindness and support of Snow Patrol and their publishing company, Polar Music.

They are also big supporters of children, human rights, the environment, education, and much more, and they strive to fight abuse and poverty. The members of Snow patrol also do what they can to support disaster relief causes and organizations that try to eliminate AIDS and HIV. Besides that, they are known supporters of organizations like Save the Children, Live Earth, and Oxfam. Together with some of these organizations, they have even visited some endangered zones in an effort to help in any way they can. In 2007, Gary Lightbody and Jonny Quinn visited Uganda through a trip organized by Oxfam and Save the Children, to help boys and girls in conflict zones in the country.

Members of Snow Patrol continue to lend their hands and resources whenever they can, and we hope that they will continue to do that for a long time. Efforts like theirs help the world, and even though they can’t do much on the grand scale of things, each good deed they do changes lives for the better. And each life helped means a better world, which is why we consider them to be one of the many great agents of positive change.