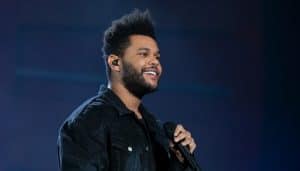 Canadian artist Abel Tesfaye is better known by his stage name The Weeknd, but he certainly made a splash in the R&B world since his appearance on the scene in 2010. His first official release came in 2012, with a compilation album of his remastered mixtapes called The Trilogy.

Since then, Tesfaye published three full-length albums, with 2016 Starboy being his most acclaimed one. He has over 70 million record sales in the United States alone and is the winner of three Grammy Awards and eight Billboard Music Awards. Also, he has been nominated for an Academy Award for Best Original Song, for his song Earned It which was in Fifty Shades of Grey soundtrack.

Throughout his career, Tesfaye hasn’t only made headlines for his outstanding music, but also his social activism and charity work. One of his most media-covered donations was to Black Lives Matter when he donated $250,000.

The artist first tweeted his support to the movement, writing: “Enough is enough. It’s time to stand up for this. We can either sit and watch or do something about it. The time is now. #blacklivesmatter.”

However, that wasn’t his only monetary contribution to an organization. Tesfaye also donated $50,000 to the University of Toronto’s Ethiopic Studies program, remembering his roots, since his parents migrated to Canada from Ethiopia. There was also his donation of $50,000 to St. Mary Ethiopian Orthodox Church in Toronto, and $100,000 to the Suubi Health Center in Uganda.

Jenna Glazer, the chief development officer at YSC, explained what it means to be supported by the big names of the music industry:

“These artists could get behind anything, so the fact that they’re doing this to support Young Survival Coalition and the fact that they have a pretty youthful following is such a great asset because people are listening to them. People are influenced by these artists, so having them talking about YSC just amplifies the message. There’s a lot going in the month of October around breast cancer awareness, but putting it in a space that is optimistic and empowering and that includes music, which is also so powerful, I think we reach an audience in a very different way than we can with a lot of other things.”

And Glazer is sure right — participation of a celebrity in an event that raises funds and awareness of illnesses is undoubtedly a powerful positive force. The Weeknd is one of the prime examples of how fame can be used for a good cause. His social activism and big heart are sure to make headlines for many years to come.