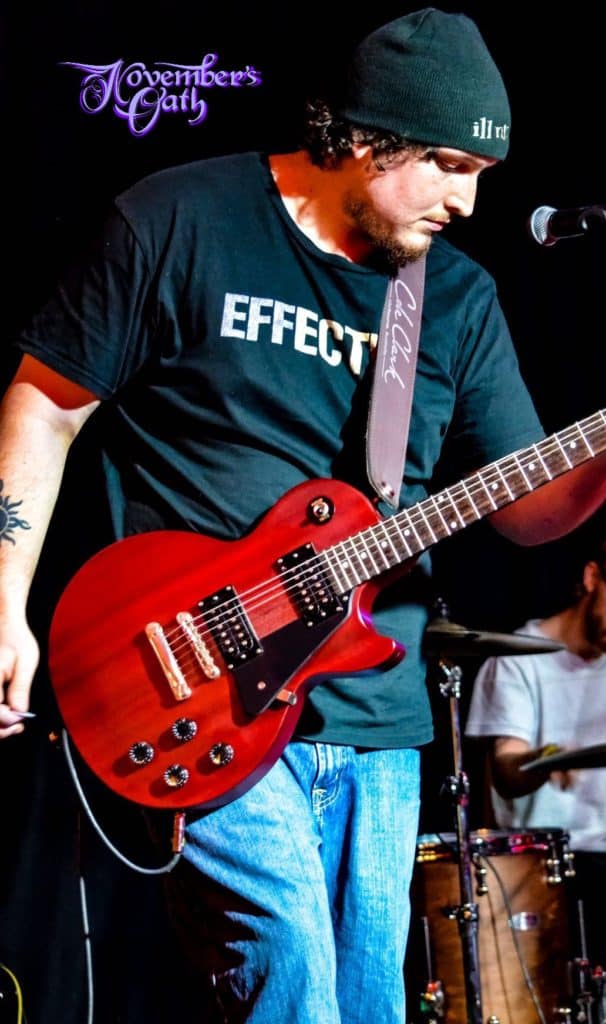 November’s Oath is a melodic alt/hard rock band based in Sydney, Australia consisting of Belinda Clark (lead vocals/lyrics & keys), Marty Kairl (guitar/backing vocals & lyrics), Seb Houbert (guitar) and Jamie Murphy (drums). They have played at some of the most iconic venues in Sydney such as The Valve Bar and Venue, The Lucky Australian Tavern and The Collingwood Hotel to name a
few.

Q: What was your original calling to music?

I was always moved by music but hearing bands like Disturbed, Linkin Park and Korn from my brother’s and sister’s cassette players would always grab my attention. I heard the powerful “I Stand Alone” by Godsmack on the end credits of The Scorpion King movie my
parents took me to see one night and that pulled me in and never let me go. I idolized every member of Godsmack, and I still do. The riffs they’d come in with and the powerful feeling it gave made me pick up the guitar and start trying to put out my own powerful grooves.

Q: How did you start?

After a few years of learning my instrument, I decided to start a band with power, passion and fun being the focus. After finding a few musicians in my high school we would jam in each other’s sheds and eventually write a heap of songs and find more musicians to complete our ensemble. We found our lead singer Belinda after a few years and played a heap of shows around Sydney and our local area as well as recording an EP our of best
material at the time.

Q: Who or what is your musical inspiration?

I would say the main ones are Evanescence, Godsmack, Slipknot and Lagwagon. We’re not complete metalheads or strictly rock in general as we draw influence from all kinds of music but that’s just what we gravitate towards more often.

Q: Which artist(s) do you look up to? Did any of them inspire you to experiment with your
music?

Godsmack, ill niño, Disturbed, Pete Murray, Evanescence, The Butterfly Effect, Nickelback, Heart, Finger Eleven, Ed Sheeran, Fall Out Boy, Trivium, Metallica. Too many to name but they’re big up there and have all influenced me in a way to either branch out or push myself with my music.

Q: Is there something new you’d like to try?

We’re open minded, so anything is on the table if it’s enjoyable. We would like to re-mix a few of our songs and give more of a hip-hop vibe to them, could be cool or an absolute disaster either way it’ll be fun to do.

Q: Why did you become involved in Music Beats Cancer? Has cancer directly or indirectly
affected you?

I became involved with Music Beats Cancer to turn tragedies into positive movements and messages (check out their page HERE). I saw an opportunity through Reverbnation to become involved and after reading about the organization I knew I wanted to be a part of the cause. It hit me deep as I had just had my car broken into and my iPod stolen which wasn’t too big a deal, but I had that iPod keep me company and all the music on it through my chemo treatment. I was diagnosed with Acute Myeloid Leukaemia in December 2019 about 8months after the death of my father and the pandemic hit hard when I went into hospital the 4th time during treatment, and I was alone most the time so the last shred of sanity I had was with the battery life of that iPod. I wrote to Mona the head of Music Beats Cancer and told her a bit of my story and why the cause meant so much to me and basically got involved. I remember all the support and help from hospital staff, nurses and doctors also other cancer patients. I wanted to give back and help anyone else going through this horrible illness.

At the moment due to lockdown our plans had to be put on hold, but we are working on recording more material and putting out a few music videos. We want to come back strong after this and put on the best rock shows we possibly can as often as possible.

I’ll never say I’m unique, but I will always stand by the fact that my music and I are completely genuine. If you get anything from my story, take it as a message to never give up and always stand firmer after being constantly knocked down, stay humble and be genuine.