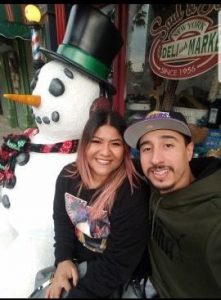 On September 13, 2018, Laura Wood was diagnosed with Stage I breast cancer. She was just 29 years old, didn’t drink, didn’t smoke, and lived a fairly healthy lifestyle. How could this have happened to Laura? Though this question was burning in her mind for so long, it is one Laura has stopped asking. A firm believer that everything happens for a reason, she, instead, allowed the experience to shape herself into the outspoken and purposeful citizen she is today.

When Laura found a lump on her breast one night in bed, she knew she could not take a chance. Though her nurse friend had suggested that the lump could just be fatty tissue, Laura felt a certain sense of urgency. She went to the doctor and an ultrasound was requested for three weeks later, but Laura knew she didn’t want to wait. After obtaining an ultrasound and a mammogram, a biopsy was scheduled.

Two days after the biopsy, she received the devastating news. Laura made changes immediately. A week later, she stopped working to reduce stress, changed her diet, and joined cancer support groups on Facebook to prepare for what she knew was a long road ahead.

Luckily, she had her husband of three years by her side as well as her family. Though there were some difficult moments, such as the hard day when she had to tell her family the news, these constants were the strength Laura needed to remain hopeful throughout surgery and treatment.

“I originally was supposed to have a lumpectomy, but after being tested positive for the BRCA gene, they told me it had to be a mastectomy. But I decided to have a double mastectomy because based on the results that we got back on the estrogen levels, it was very likely for me to have cancer on my other breast within two years.”

Throughout the process, Laura consistently relied on Facebook support groups to answer endless questions. Laura did not underestimate the power of social media. Not only did the Facebook groups help immensely, but Laura decided to create a Youtube channel documenting her story and sharing her emotional journey—the part that no one, not even a doctor, can prepare you for. 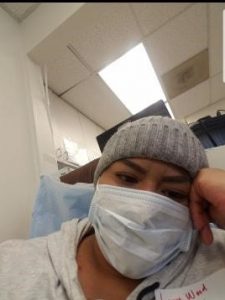 In her video “Living with cancer for the 1st month” she shares, “It’s been very helpful to have them answer the questions that I don’t have answers to. You know, I always ask my doctor questions but you, kind of, always want an opinion of somebody that has gone through it, that can guide you.”

On her own channel, Laura strives to keep her advice and storytelling real and raw. She can be followed through all of the stages of grief, from denial to depression. In her first video, Laura deals with the difficulties of accepting her condition. Close to tears, she opened up in one of her videos, “I don’t want to cry. I cried yesterday all day. I cried at church I cried at my house and I’m still—I cannot accept it. I cannot accept it. I cannot say I have cancer and believe it. It’s so difficult.”

Laura talks not only about the physical hardships associated with undergoing chemotherapy but the emotional toll it takes on a patient. In later videos, topics such as fertility issues to hair loss are covered. In fact, her latest video documents the harsh reality of losing hair. Far more than a physical symptom, Laura expands on the ever-consuming role cancer assumes in one’s identity.

Though these situations can be difficult to comes to term with, Laura does not shy away from talking about them and even shedding a few tears on camera. She hopes to provide support and comfort to those in similar situations. Her naturally bubbly and positive personality makes her easy to connect with, but she shares that this side of her diminished as she faced cancer, which was extremely difficult for Laura. As a generally happy person, it was, for once, very hard for Laura to take her own advice.

“I could be having the best time, and that sadness still comes with me which is very hard because I’m not usually that person. Like, it just doesn’t feel like myself.”

On the other hand, the experience also exposed Laura to many different people and situations and Laura says that she was definitely not as open and outspoken of a person as she is now. Laura constantly believed something good will come out of her journey and is, in fact, more in tune with herself and her purpose for the greater good.

Laura wants everyone to be aware that cancer is not reserved for the elderly or the stressed. She strives to encourage everyone to prioritize their health and to be wary of early signs and symptoms because the repercussions to treating cancer can have lifelong effects, such as the effect chemotherapy could have on fertility, an issue Laura still deals with.

In her first video, “Finding out I have Cancer at 29,” she says, “This is for you guys to be aware that it happens when you least expect it. I’m not even a mother yet and I’m already going to be going through this. It’s hard, but if there’s something good that’s going to come out of this, it’s me letting you guys know that it is an issue and it’s something that we have to be aware about and if it happened to me, it can happen to anybody.

Recently back at work, Laura has not forgotten the impact and learning that occurred over the past year and continues to help her community and will raise money for Valley Breast Cancer Foundation which seeks to provide timely access to breast cancer screening, diagnosis and treatment for uninsured and under-insured women. In addition, with her voice, she tries to help and educate as many as possible, and knows that biotech innovation could be a game-changer when it comes to finding treatment with fewer long-lasting and serious side effects.

Embracing the Journey: From a Child’s Perspective

Acute lymphoblastic leukemia, ALL, is the most common pediatric cancer in America. As treatments and procedures have been honed for years, Paige’s positive experience with treatment provides hope and a…Read More