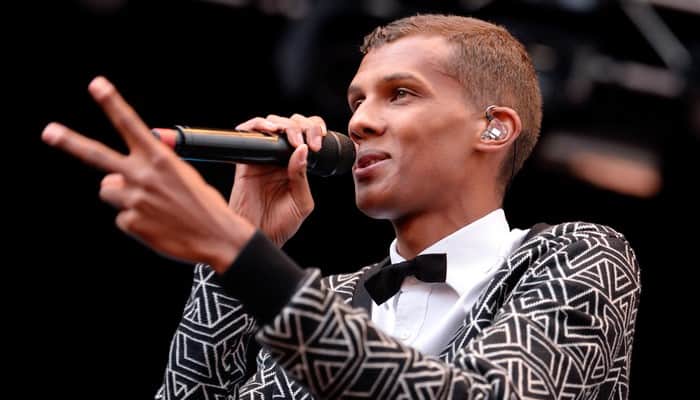 Paul Van Haver, better known by his stage name Stromae (an anagram of “maestro”), is a multi-talented Belgian singer, musician, rapper, and songwriter. He was born in 1985 in Brussels to a Rwandan father and a Belgian mother. Unfortunately, he and his siblings were raised only by their mother, as his father, a successful architect, was mostly absent from their life. He was later killed during the 1994 Rwandan genocide while visiting his family.

Van Haver established himself in both the hip hop and electronic music genres, singing primarily in French, though he has performed some of his songs in Flemish. His sound is a unique blend of electro-beats, modern pop, hip hop, and African rhythms.

Praised by the likes of Jean-Claude Van Damme and Anna Wintour, Stromae gained international success and public attention in 2009 with his hit song “Alors on Danse,” from his debut album Cheese. The song soon became a number one hit in Europe and was later remixed in collaboration with Kanye West and Gilbere Forte. The success of this album was incredible, and his music went international.

Eurodance and electronic music played a huge influence on his music style. Talking about his music, Stromae said: “I was in a little group making rap music. I thought that rather than copying the French sound, I’d focus on a more American style but give it a European spin. And then I rediscovered the 90s Eurodance. For a long time, we were ashamed of that sound, but in fact, there’s a lot to discover. It has its roots in everything from house to salsa.”

His second album, Racine carrée or √ (Square root), was an even bigger commercial success, selling over 2 million copies in France alone. A standout hit in Racine carrée was the first single, “Papaoutai,” that took the world by storm with a catchy melody, memorable vocals, and striking, heavy lyrics. “Where are you, papa? Tell me, where are you, papa?” Stromae sings. “Everyone knows how to raise a child / But no one knows how to raise a father.”

After many years of career triumphs, Stromae is still shy about his success. He says that he worries he will lose his humility and often oscillate between cynicism, conviction, and ambivalence. “I’m trying to stay normal,” he says. “But it’s hard. Everything has changed. Success is a gift, but it’s a handicap at the same time, I think.”

Though he tries to stay detached from his stage persona and points out that his songs are not autobiographical, he still loves to support and sing about the causes he strongly believes in. Such is the French song “Quand c’est?” and the black and white video that accompanies it. In the Quand c’est song and music video, Paul Van Haver tries to fight against spider-like legs, which represent cancer, and the malevolence of this disease. The lyrics go something like “Cancer, cancer, dis-moi quand c’est? Cancer, cancer, qui est le prochain? Qui est, qui est, qui est le prochain?,” which translates to “Cancer, cancer, oh cancer tell me when? Cancer, cancer, who’s next?”

“When hearing this song, I get a strong feeling of sorrow and sympathy for those who went, or is currently going through cancer,” says Stromae.

In 2015, he had to cancel his tour because of severe anxiety attacks caused by malaria medicine. Things got worse when he started struggling with panic attacks, making it more difficult to go out in public or perform. Aside from a song made to promote his fashion label Mosaert, the world hasn’t seen or heard from him since 2018.

We are happy to wait for this young visionary to surprise us with more of his captivating music and videos. Until then, we recommend that you (re)discover his work and the important messages he tries to get across.